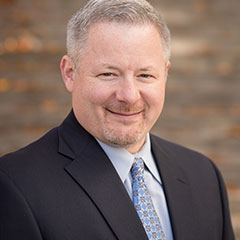 Mike began his career at Rush, Hannula, Harkins & Kyler, as a summer intern after his first year of law school in 2000. After graduating from Seattle University School of Law in 2002, Mike joined the firm as an Associate Attorney. He became a Partner with the firm in 2009.

Mike is a tenacious trial lawyer who puts every ounce of effort and enthusiasm possible into his work. His approach to each client’s case is thorough, exhausting all possible angles to a problem. His legal research on everything, from procedural issues to substantive law, is a trusted tool in the office. Mike has a unique understanding of the dynamics and strategies involved in preparing personal injury and wrongful death cases for trial in such a way that defendants often settle.

While representing victims of personal injury and wrongful death, Mike has jumped into his work with both feet, handling a wide variety of cases including truck, boat, vehicle and motorcycle accident litigation, construction site injuries, premises liability and medical malpractice.

Mike has a interest in representing the most cherished and particularly vulnerable clients in our community, those injured or killed due to nursing home negligence. He is a frequent speaker at legal education seminars on nursing home litigation and he authored a chapter in the Nursing Home Litigation Deskbook produced by the Washington State Association for Justice. Mike was the Chair of the Nursing Home Litigation Section for the Washington State Association for Justice for 2009-2010.

“I can’t let these people down,” Mike says. “Our clients are hard-working folks, sincere in their efforts and have had the worst of all things happen to them and their families because of personal injury or death. Even in the era of ‘tort reform’ I refuse to apologize for representing these people. It’s a privilege. All I try to do is bring my clients back to as nearly as whole as possible within the bounds of the law, so they can rebuild their shattered lives.” As Mike explained, “perfect justice would require undoing the tragedy that has visited my clients. We all know, however, that that cannot be done, which is why the law requires full compensation be paid to balance the harms and losses my clients have suffered. I am truly lucky to be doing positive things for so many people.”

Outside of the office Mike is an avid outdoorsman and sportsmen. His kids enjoy participating in junior rodeo and from 2013 – 2015 Mike served as the President of the Northwest Junior Rodeo Association. Mike also helps as a bullfighter inside the rodeo arena to help keep the contestants safe during bull riding events.

Mike has served on the Board of Governors for the Washington State Association for Justice from 2011- 2015. In 2007, he served as the President of the Tacoma-Pierce County Bar Association Young Lawyers Section.

In 2014, Mike was a Top 10 Finalist for the Trial Lawyers Care Award for his community service efforts in organizing and delivering relief supplies to the victims of the Taylor Bridge Fire in Eastern Washington.