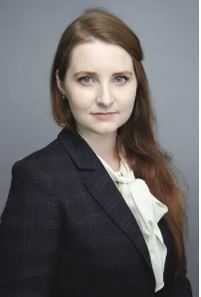 Laraclay is a trial lawyer with Golden Law Office in Lexington, Kentucky. She heads the firm’s Nursing Home and Medical Malpractice Group and devotes her practice to fighting elder abuse in nursing homes and corporate wrongdoing in the healthcare system. Laraclay believes that the American jury system is the only way to hold large companies accountable. She exclusively represents individuals who have been harmed and devotes a significant portion of her practice to the enforcement of nursing home residents’ rights.

Since her admission to the bar, Laraclay has tried multiple jury trials to successful results. Recently, in February of 2020, she obtained a $1.08 million unanimous jury verdict in Bath County, Kentucky, for her client and has obtained millions of dollars in settlements over her career. She is a determined litigator and an experienced appellate advocate in both the federal and state systems. Laraclay is a recognized national speaker on issues relating to electronic medical records preservation and discovery. Her cases have been featured in the national news media because they raise complex questions about the deletion and fabrication of medical records and physician ethics. She has been selected to the 2021 Super Lawyers Rising Star list, an honor awarded to just 2.5% of Kentucky attorneys. She is also recognized by the National Trial Lawyers as a Top 40 under 40 Civil Plaintiff Lawyer.

Laraclay’s legal practice is informed by her background and training. When she passed the bar, her first legal job was at a large regional law firm that only did defense work. She spent two years defending national manufacturing corporations, nursing home chains, and pharmaceutical companies against their own employees, victims of malpractice, and others who had been injured by her clients’ businesses. In 2016, she nearly quit the practice of law rather than continue her defense practice. Instead, she decided to change her whole career to focus exclusively on injured Kentuckians and has never looked back. Laraclay’s inside experience on how large corporations operate from a financial, legal, and ethical perspective helps her expose the harm done to her clients in the courtroom.

United States Court of Appeals for the Sixth Circuit