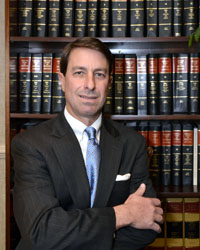 Glenn Kushel is an Atlanta trial lawyer with over 20 years of experience.

Glenn began practicing law in 1988 as a defense lawyer with the law firm Long, Weinberg, Ansley & Wheeler. He primarily represented physicians, hospitals and other healthcare providers in medical malpractice actions, but also handled a variety of other types of cases including insurance disputes, product liability, automobile, and trucking cases.

In 1993, Glenn began a plaintiff’s practice with the firm of Mills & Moraitakis, and became a named partner in 1995. He has dedicated his practice to representing those injured or killed as a result of medical malpractice, nursing home abuse, trucking accidents, automobile accidents, product liability and other negligent and intentional acts.

Throughout his career, Glenn has successfully tried and resolved many cases in areas such as medical malpractice and personal injury. For example, he and his partner Nick Moraitakis argued the case ofKeenan v. Plouffe to the Georgia Supreme Court, a case that involved a young woman who was severely brain damaged during a surgery at the Medical College of Georgia. In a landmark decision, the Supreme Court held that the defendant physician, a faculty member at the Medical College, was not immune from suit under the Georgia Tort Claims Act. Instead, he could be held liable individually. The case settled for an amount exceeding seven and one half million dollars.

Glen and his partners also successfully handled a significant case against the City of Atlanta and other defendants when their client’s husband was killed in a sinkhole that occurred at the Courtyard by Marriott Hotel in Atlanta. After years of litigation, the case was settled for a favorable amount shortly before trial.

Recently, the firm tried and won a suit against Metropolitan Atlanta Rapid Transit Authority (MARTA) in a negligent security case. The verdict resulted in a one million dollar reward for their client, the victim of a stabbing at a MARTA station. Another recent case against MARTA that resolved in their client’s favor involved a MARTA bus accident that rendered their client a quadriplegic.

Glenn has successfully litigated cases against orthopedists, surgeons, cardiologists, pediatricians, obstetrician-gynecologists, anesthesiologists and other medical specialists. He has a particular interest in nursing home abuse and neglect cases. He and his partner have also handled many serious trucking, automobile and premises liability cases. Their automobile product cases have involved defects relating to stability, roof crush, fuel system integrity, seatbacks and seatbelts.

In the early 2000s, Glenn worked on behalf of the Georgia Trial Lawyers Association as Legislative Chair helping to defeat efforts to pass tort laws seeking to prevent access to the court system. In 2005, he was elected as President of the Association. During his term, he and other Executive Committee members worked to restructure the Association to place a greater emphasis on legislative efforts and outreach, as well as efforts to preserve and protect the civil justice system and citizens’ access to the courts.

Glenn is married with two children. He and his family are very active in the school community. His interests include spending time with his family, golf, tennis and boating.

Former Committee Member of the Atlanta Council of Young Lawyers