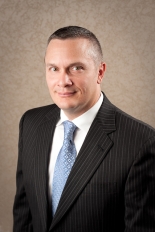 Ernie Trichler received his Bachelor of Arts in Political Science from Wright State University in 1993. Following graduation, he served as an officer in the United States Army and served overseas in Operation Desert Storm. He received his Juris Doctorate from DePaul University College of Law, Chicago, Illinois, in 1999.

Following graduation, Ernie worked as an Assistant Attorney General in the Tampa bureau where he primarily litigated cases involving abused, neglected and abandoned children. He joined the law firm of Wicker, Smith, O'Hara, McCoy, Graham & Ford, P.A., as an associate attorney in June 2001, where he practiced in the areas of long-term care, general liability and medical malpractice. He joined Bush Graziano & Rice, P.A., as an associate attorney in March 2003, where he continued to practice in the areas of medical malpractice, nursing home abuse, products liability and general liability cases. Ernie was voted Shareholder in December of 2006 prior to leaving to form Trichler Law Center, P.A. in January of 2007. Prior to the formation of Mandelbaum Trichler Law Center, P.A. in 2011, Ernie continued to represent insurance carriers and their insured's in the areas of commercial trucking, medical malpractice, wrongful death, motorcycle accidents and automobile negligence.

Ernie is a member of The Florida Bar, the Trial Attorneys Section of the Florida Bar, the Hillsborough County Bar Association, the Florida Justice Association and the Tampa Bay Trial Lawyers Association. He is also admitted to practice in the Middle and Southern Districts of the U.S. District Court of Florida. Ernie now dedicates his practice solely to representing the injured and primarily concentrates in the areas of long-term care, medical malpractice, premises liability, trucking cases, motorcycle cases and wrongful death. Ernie has tried several cases to verdict with favorable results for his clients. Ernie was named as one of Florida's Rising Stars in 2009. Ernie is also a frequent lecturer for continuing legal education seminars in the State of Florida. In 2013, Ernie was appointed to the Hillsborough County Civil Service Board by Florida Governor, Rick Scott, for a two year term.