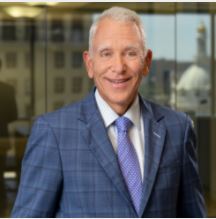 Brian S. Brown, one of the firm’s founding partners, as well as its Managing Member, has over thirty years of experience as a trial lawyer and focuses his practice on litigating nursing home abuse and medical malpractice cases.

Brian has tried well over 100 tort cases and has obtained multiple multi-million dollar verdicts. Over his career, he has recovered more than $175 million for his clients, through both trial and settlement. In addition to his trial experience, Brian has extensive appellate experience, having appeared before the Maryland Court of Appeals twelve times, and the Court of Special Appeals more than fifty times.

He is admitted to practice in Maryland and the District of Columbia, as well as in the 4th Circuit Court of Appeals.

Brian is currently a member of the Maryland Association for Justice (MAJ) and the American Association for Justice (AAJ). Brian has presented on legal topics in a variety of settings, including for the Inn of Court, and over ten times for HB Litigation Conferences. He has also presented to the entire bench of the Circuit Court of Baltimore City regarding the evolving law of expert testimony in Maryland.

In 2022, Brian was named a Leader in Law Honoree by The Daily Record and the Maryland State Bar Association. In 2020, Brian was selected as “Trial Lawyer of the Year” by the MAJ. The MAJ Trial Lawyer of the Year Award is bestowed annually upon the Maryland trial lawyer or team of trial lawyers who made the greatest contribution to the public interest by trying or settling a case of precedential value – precedential either because it changed the law in a way that is beneficial to Marylanders or has, for other reasons, “sent a message” to those who might otherwise trample upon the rights of Maryland citizens. Brian has been named as a Super Lawyer, and he has been selected as a member of both the Multi-Million Dollar Advocates Forum and of the prestigious Litigation Counsel of America.

Outside of his legal work, Brian has served as the President of the Board for the Maryland Disability Law Center (now known as Disability Rights Maryland), and has volunteered with other civic organizations, including with the Upton School Foundation and with Higher Achievement.

J.D. and LL.M., University of Baltimore School of Law

Maryland Association for Justice: Trial Lawyer of the Year